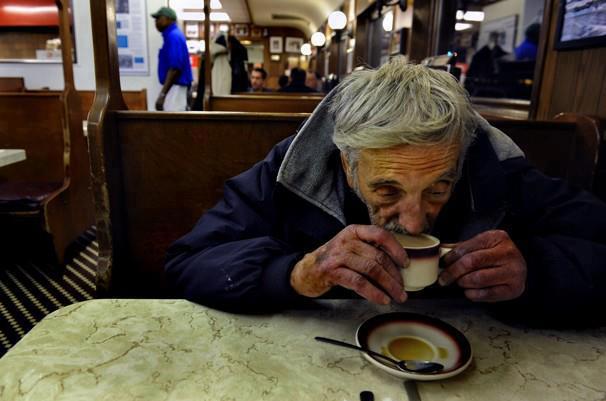 When asked about a favorite nonprofit #globalite Rajee said: “I like suspended coffee. It motivates and inspires people to be kind and pay it forward. The stories posted by the people on the website are truly inspiring. The fact that it’s growing fast shows there are more kind people in the world than unkind.”

So we decided to find out more about the organization, and sure enough, we have found our #servicesaturday pick of the week is, Suspended Coffees!  We love it because it is truly a Globalizm  kinda story – Conscious Evolution, Collective Excellence !

WHAT IS SUSPENDED COFFEES?

The idea of a suspended coffee is simple:

When you buy a coffee, you pay for a second one. The barista gives you your coffee, then logs the second coffee as “suspended” (meaning that the transaction has been paused, or not yet completed – the money has been received, but the coffee has not yet been delivered).

When someone who can’t afford a coffee comes in, they can ask whether there are any “suspended” coffees. The barista checks the log and, if there are any pre-paid coffees, the person is given a free coffee. The transaction is then considered complete.

Suspended Coffees was started by 29 year old plumber and father of 4, John Sweeney from Ireland in March 2013.  He had lost his job in 2012 when Ireland was at its peak of unemployment.  While he was fervently searching for a job, he came upon a story that gave him hope – the tale of caffè sospeso, or Suspended Coffees, an Italian goodwill tradition, beginning in Naples, where a person experiencing good luck would buy a cup of coffee but pay for two – leaving a caffè sospeso (or ‘suspended coffee’) for a person in need to claim later. It was a simple way to spread some kindness and cheer someone in the community.

John was inspired to create a facebook page hoping that some local cafes would join, but soon, the concept appealed to people around the globe and it become a worldwide phenomenon with cafes from all around the world joining the movement.

HERE IT IS IN ACTION:

Filling Station Cafe is a tiny retro style coffee shop and diner on the outskirts of Keswick in the Lake District with free parking. Cyclists, bikers, walkers, children, dogs… all welcome.

HOW DID THE TRADITION BEGIN IN NAPLES?

We found a personal account at a blog called AccidentalTourist:

I was having an excellent coffee in a caffe’ bar called Augustus on the main shopping avenue, via Toledo. Random eavesdropping is one of my favorite sports, so there I was, ears wide open and sipping as slow as I could to prolongue my exposure to local conversations.

A well dressed gentleman of about 80 with a Borsalino hat and and  elegant cane, walks to the cash register and asks to pay for “a coffee, and a suspended coffee”. Then drinks his coffee and leaves the bar. I tried to ignore my curiosity, but I only could for so long. Then I just had to ask the man at the register, what in the world is a “suspended coffee”.

So he patiently explained, trying to speak as close to a scholastic Italian as he could (my question had given me away as an ignorant stranger):

“Right after the war, many gentlemen had lost everything they had, and couldn’t even afford coffee. Now, being that black hot liquid pleasure not considered a treat, but rather a basic human right in the life of any Neapolitan, those gentlemen who could still afford to have one, took a habit of paying for two: one they drank, the other was credited, to be had by the first less fortunate peer who would casually walk in the bar. The bartender would then say: “would you like a coffee, sir?”. Which meant: there is a coffee paid for you, if you can’t afford one. The donor and the recipient would remain anonymous to each other, to protect generosity, pride, and the pleasure of coffee beyond hardships.

What a wonderful concept and tradition to pick up and run with isn’t it!

HOW DOES SUSPENDED COFEES WORK?   Here’s a video:

HOW YOU CAN JOIN THE MOVEMENT:

Look up Participating Cafes on Suspended Coffees website, find a cafe near you.  If you find none, may be you could suggest it to a local coffee shop.  But really, as John Sweeney says, it is more than coffee isn’t it?  How can we go beyond looking after our own needs and wants, and look out for others in our community?  Go on, spread some kindness.