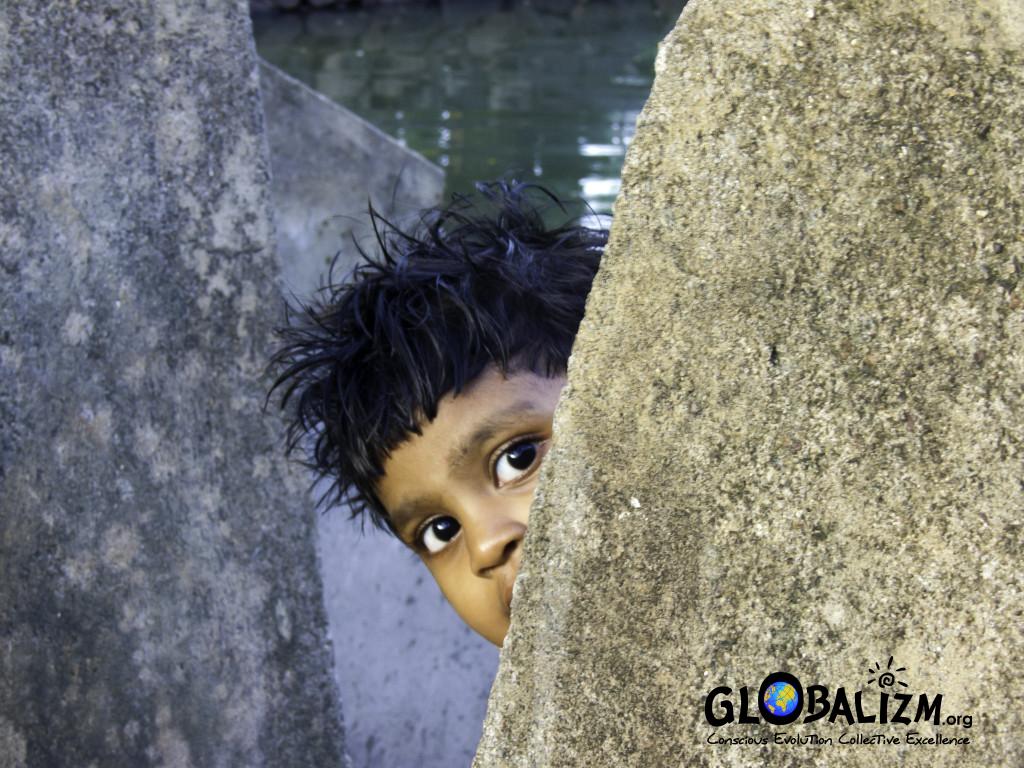 How did she know about this?

Given that this was the 8th day of fasting, it was only a matter of time before my daughter asked me why I was doing this. So i decided to tell the story as a bedtime story.

Me: There was a little boy named Gopi who was having a tough time sleeping after a long day. His mother sat next to him and showed him the stars in the night and sang

My daughter: Twinkle Twinkle little star, how I wonder what you are, up above the world so high, like a diamond in the sky

Me: Gopi was still not sleeping. His mother said that he has to wake up early in the morning and get ready for school. If he was late, the school bus would not take him around the town (pause)

Me: Gopi said, but it’s winter (Dec 2nd) Amma and i can’t get up early in the morning. Gopi’s mom said, “Don’t worry Gopi, you can wear the sweater which we bought from the man who had the black sheep” (pause)

My daughter: Baba black sheep have you any wool …

Me: Gopi then asked, but Amma, what would I have for breakfast early in the morning.  Well, you can have some fresh buns.

Me: And then Gopi went to bed, so did his Mother, Father, Brother and his Grandparents. But they never woke up again.

My daughter: What do you mean?

Me: There was a factory (which makes stuff) near by and it had an accident. All the poisonous gasses leaked and filled up Gopi’s house. Gopi inhaled the gasses and it hurt him a lot. He coughed and vomited and got very sick, so sick that he died. No one in his entire family woke up after that night. His entire family died that night.

My daughter: (Silence – She did not ask me any questions)

Me: Just like Gopi, there were many kids who died and then there were many kids who got very sick. I’m fasting so that more people know about what happened on Dec 2nd-3rd 1984, so we can get more money for the people and they can go to the doctor.  Even after so many years, the effects of those poisonous gases and the harm they caused still linger.

My daughter: Then why can’t we all do fasting, there will be 3 more people.

Me: I smiled at her and wished if it were that simple 🙂

Now she remembers that Tuesday is the fasting day and she has even started reminding me that I have to fast on Tuesdays. 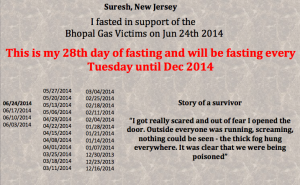 Join me:  Click here to Sign up for the global solidarity fast for Bhopal
About the Bhopal Gas Tragedy:

The Bhopal disaster, also referred to as the Bhopal gas tragedy, was a gas leak incident in India, considered the world’s worst industrial disaster. It occurred on the night of 2–3 December 1984 at the Union Carbide India Limited (UCIL) pesticide plant in Bhopal, Madhya Pradesh. Over 500,000 people were exposed to methyl isocyanate (MIC) gas and other chemicals. The toxic substance made its way in and around theshanty towns located near the plant. Estimates vary on the death toll. The official immediate death toll was 2,259. The government of Madhya Pradesh confirmed a total of 3,787 deaths related to the gas release.[3] Others estimate 8,000 died within two weeks and another 8,000 or more have since died from gas-related diseases.[4][5][6] A government affidavit in 2006 stated the leak caused 558,125 injuries including 38,478 temporary partial injuries and approximately 3,900 severely and permanently disabling injuries. Read more on Wikipedia