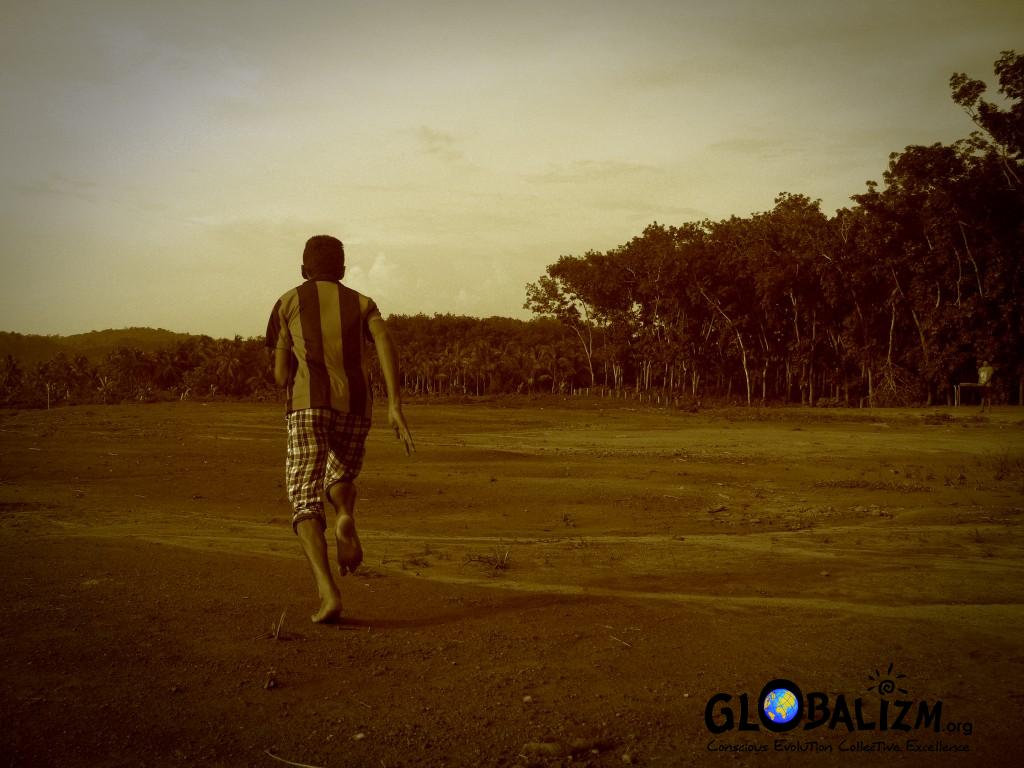 To run is to experience a freedom that was in abundant supply in our sepia-tinted childhood days of yore, yet has been severely constrained and squeezed out of our busily unimportant lives by the pressures and strain of everyday living. To push off, shaking the dust of decades of indolence, to hear your heart beat like Zakir Hussain on the tabla in a fit of follicular frenzy, to feel the unfettered vagabonding wind brush your face like a mother’s gentle caress, to feel the blood pumping through your dusty arteries and fueling your emaciated muscles in unison onward onto a journey of liberation from the chains of corporeal mediocrity, is to experience a bit of heaven, a sliver of nirvana in the midst of our humdrum daily routine. Incidentally it is also rumored to be good for your heart, metabolism, mood and hair.

I fancied myself as a bit of a runner in my childhood. One of my earliest memories was of racing on a beach with my brother and cousins, with the race being abruptly suspended due to my unfortunate cousin, Mahesh, accidentally straying onto a mat of putrescent fish laid to dry. The smell and mortification lingered for a while, the memory a lot longer. I have no memories though of winning anything remotely of consequence. The closest I came to childhood glory was 2nd place in the heats in a school competition. My illusions of greatness were quickly relegated to their rightful place in the finals, where I finished an ignominious second, from the rear. I would like to say that I took heart from at least making the finals and persevered with running, steadily improving my stamina and speed, slowly but surely climbing the ladder of success, until one day I breasted the tape leaving my unworthy opponents cursing and biting the dust. But nothing of the sort happened. The manner of the defeat rather than the outcome itself rankled and took the wind out of my highflying sails. I shifted my loyalties to cricket, where too incidentally, I didn’t exactly set the stands on fire, being more a grim accumulator than a flamboyant dasher.

My dormant, rather extinct, interest in running was rekindled recently, when my wife, not the most athletically inclined person, as part of her post-maternity fitness program, strangely started running, daughter in tow in a jogging stroller. It culminated in her participating in and easily finishing a 5k run to my utter surprise, awe and envy. I made up my mind to start running and even went for a couple of solo runs. Huffing and puffing after a few minutes, with pride as my only remaining fuel, I managed to complete a couple of rounds of the block with great difficulty, my lack of fitness embarrassingly evident. Running went back into cold storage for a few months.

Then I moved to Simi Valley, where a friend casually invited me for an evening stroll in the park, little suspecting what lay in store. As soon as I hit the park, a powerful, inexplicable urge to start running gripped me. My wife had earlier educated me on the technique she used to get started, called interval training, consisting of alternating intervals of running and walking. I started out with a 1-minute/3-minute run/walk cycle using an iPhone app called Interval Timer, dragging my poor friend along in tow. It was surprisingly easy initially, although I was sweating like an equatorial hog in a Turkish bath after a couple of rounds. I did that for about a week, by which time I had grown emboldened enough to contemplate intensifying to 1.5/2.5 run/walk. That proved far more difficult for the first couple of days. But I dutifully kept my nose to the grindstone, and a week later, was comfortably lapping a couple of rounds. My ego now bloated like an oversized balloon, I ratcheted it up to 2/1 run/walk, which rate too I was rather surprisingly able to cope with without too much discomfort. I then got over ambitious and tried 2.5/0.5 after only a couple of days with disastrous results. The combination of higher effort and lower recovery time utterly depleted my still fledgling reserves and I had to mortifyingly switch back to 2/1 at the end of one round. The next day my body was screaming murder, and my running program was effectively setback by at least a few days.

The lesson here for me was to let things take their natural course, to not push too hard, to not go against the grain but with it, to not fight the river but ride it. As Pooh Bear would say, “Things just happen in the right way, at the right time.” (from Tao of Pooh by Benjamin Hoff). Another lesson, heard ad nauseam, but whose truth can only be appreciated when one actually follows it, was that all it takes is one small, almost inconsequentially trivial step to start a journey of a thousand miles. In my case, just turning up at the park triggered my new running habit. Yet another learning – small efforts, almost comically trivial at times, consistently, unfailingly, unflinchingly repeated daily add up, compounding over time into great, towering, magnificent edifices. So, I urge you, whatever the journey you are contemplating, to boldly take that first step into the unknown, to cross that invisible barrier that separates success from failure (for lack of trying is also a kind of failure), to do just a little, but to do it every single day, to not fight obstacles too hard to overcome, but to go around them, to flow with this river called life towards the destination of your dreams.

A drop in the ocean of humanity attempting to raise my spiritual and scientific awareness of the world that surrounds me that I may endeavor to properly appreciate the awe-inspiring creation that the cosmos truly is. My personal blog is at: //cs31415.wordpress.com