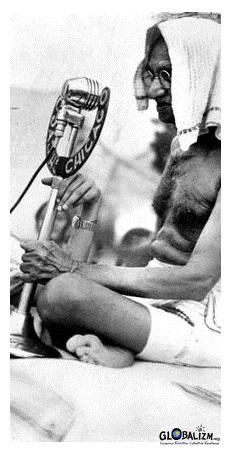 I received the Hindi journal for July today from Hindi Prachar Sabha*.  As I was opening the book I saw a picture of Mahatma Gandhi sitting on a stage with a microphone.  Below that were the following words and you will be amazed at the relevance just as we have launched and taken the first step on Globalizm.

Bapu’s message comes as a blessing and reads as follows (in Hindi and English):

*’Hindi Prachar Sabha’ was a movement that emerged as part of Freedom Movement and the leaders who led the nation to ‘FREE INDIA’ felt the necessity of making a single Indian Language the National Language,and through that language unify the people and thereby intensify National Integration.