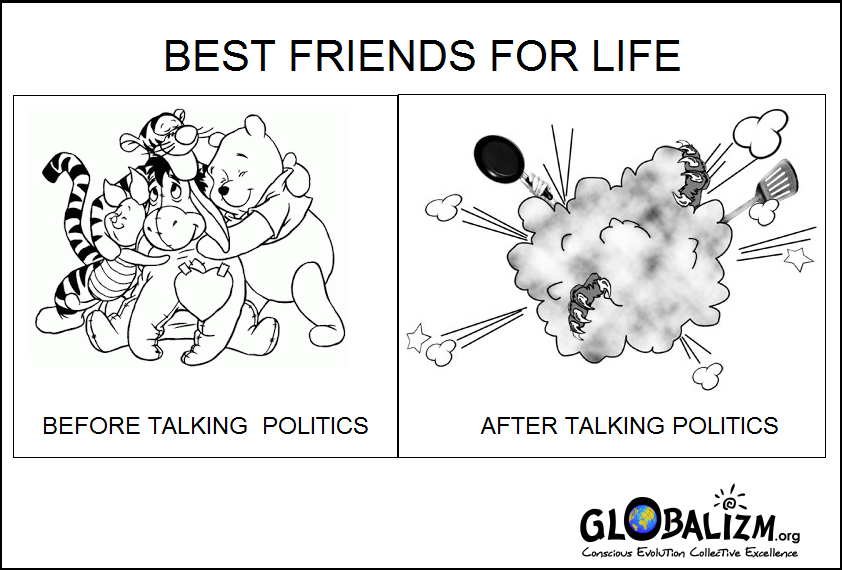 #globalite ssubrama observes what idealogy does even to a small group of friends, leave alone the rest of the world! #sundayoneday

Over the last few years I feel like I have written a lot and had a lot of conversations on a forum of schoolmates, I have known since childhood. Topics we discuss range from our daily blues, bliss, hobbies, world events, world views and sometimes like Lewis Carol put it, “Cabbages and Kings and if Pigs have Wings”. I joined the forum after my father died and I was feeling really lost emotionally and just talking to a bunch of people I had not talked to in seventeen years took me back to a happy time in my life.

Of late the discussions turned towards politics, of Indian politics invariably and Gandhi and Nehru and the freedom struggle. The exchanges which used to be enjoyable to me, turned quite vitriolic with numerous opinions and I started to question my own world view and what is considered good and bad. I decided after considerable thought that my opinion and world view up until now, that Gandhi was good and Hitler was bad (as simplistic as this may sound :-)), as I always thought, was the opinion I wanted to live my life by. Now, my friends are the sweetest, kindest, most loyal people one could ever meet. But when it came to world affairs, nation states and politics the mood of the entire forum changed to deep hostility and rancor. Some of us agreed to disagree, the others plain disagreed, “paws, claws and jaws”.

Of course we are good friends and none of this, impacts our friendship. But I realized each person has a very unique world view and is fairly intolerant of other views (I have to admit for the sake of fairness, myself included), however hard we tried to veil it on occasion, though, since we have known each other in some sense, since our teens, we don’t try very hard :-). To keep the peace on this forum I don’t think I will delve into exact discussions which were very varied and would contribute to confusion on many levels.

To meditate after my exchange, I started to think of John Lennon’s (of the Beatles) “Imagine”. For those not familiar with the song:
“Imagine”
Imagine there’s no heaven
It’s easy if you try
No hell below us
Above us only sky
Imagine all the people
Living for today…

I also started to understand why when life should be simple, it simply is not. If a forum of people who have known each other a long time cannot agree, that too only in writing on a forum, about a set of abstract ideas that don’t really affect us in the near future, a world of seven billion people living in absolute harmony is a challenge. That is why I started to see the importance of a forum that focuses on what unites us and what defines humanity. If only the whole world would “Imagine”….

A software developer with many interests including history, art, nature, photography, science, society and just watching the world go by....